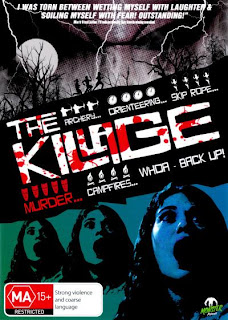 Archery, Skip-rope, Campfires, Murder, Orienteering... Whoa - Back up.  Murder?  Yes, that’s true.  Murder is afoot in this comedy/horror right out of my own backyard.  Rhiannon Irons, a.k.a Ahlephia, here with a new in-depth review of another Australian film.  This time I tackle the horror/comedy styling of THE KILLAGE.  WARNING:  There may be spoilers.

It’s a well known fact that Australians have a unique sense of humor.  So what happens when you take that humor, team it up with a group of relatively unknown actors, set it at a campsite in Queensland and then have a psycho killer running around?  One of the funniest comedy/slashers ever made.

The storyline is as follows: A group of eleven recruits, composed entirely of excruciating social stereotypes, embark on a weekend long retreat for work.  This retreat is designed to see who is capable of being the next team leader.  Everything goes relatively smoothly until the first campfire where a killer’s presence is made known with a simple note that reads “I’m going to kill each and every one of you (very creatively).”  (Fun Fact: The camp used in the film is where I spent my year 12 camp back in 2003)

From that point on, all hell breaks loose as the recruits begin accusing each other of writing the sinister note.  Most of them shrug it off as a poor attempt at a joke, not wanting to take it seriously, but when the bodies begin piling up, they soon realize that it’s anything but a joke.

The one thing I loved most about this film is how it took the stereotypes you see from other horror films (i.e.; the dumb jock, the bimbo girlfriend etc) and completely turned everything upside down.  There are plenty of references to horror films of old, not necessarily by name, but by what is expected to happen next.

Before I go any further into the story (and the creative kills) let’s take a look at the characters.

There’s Warren (Dryden Bingham), the nerd, who has a fixation for his camera that is always around his neck.  He seems to understand the situation better than anyone else and is always full of ideas…just not always good ones.

There’s Gus (Joe Bauer), the gui-tard, who is more preoccupied with his guitar and chasing Emily around then finding out who the killer is.  He’s a little on the dopey side and doesn’t take anything too seriously.

There’s Lucy (Laura Jane Turner), the lesbian, who claims that she isn’t a lesbian.  She’s best friends with Gus and Warren but she hides her affections for Warren (more about that later).

There’s Krystal (Meisha Lowe), the bimbo, who’s better known as Bam-Bam by her boyfriend Jock.  Krystal is the quintessential dumb blonde who seems to care more about her boyfriend then he cares about her.

There’s Jock (Andrew O’Sullivan), the…erh….jock, who’s more interested in his biceps then what’s happening around him.  I will give Jock some credit because he does come through, proving his usefulness later on in the film.  Plus he walks around naked for most part of the movie.

There’s Andre (Cameron Sowden), the druggie, who spends the entire time insisting that he’s not a druggie.  Gus repeatedly accuses him of it as both of them are carrying guitar cases.  Andre insists that his isn’t to carry a bong but rather a violin.

There’s Madison (Johancee Theron), the Goth, whose addiction to reading Satan: The Unofficial Biography left me in stitches.  Her obsession with all things gloomy and repressed really is the social stereotype that society projects.

There’s Hannah (Carmel Savage), the Yuppie bitch, and boy, what a bitch she is.  She stares down her nose at everyone, especially Madison and Krystal, though she claims to be friends with Krystal.  Needless to say, she’s one character that you really wouldn’t miss.

There’s Dickman (Daniel Johnston), the asshole, and let me tell you, he really lives up to his name.  He’s the only character to don an American accent and is in a wheelchair.  Despite his foul mouth and attitude, he provides a wicked sense of humor and is mostly responsible for the laughs this film gets.

There’s Dimitri (Jess Thomas-Hall), the fairy.  This character is literally so gay he makes Jack from Will And Grace look straight.  He has a slight obsession with Jock (when you watch it, you’ll see what I mean) and despite his meek nature; he really has a mean streak…and a powerful bitch slap.

There’s Emily (Rita Artmann), the hot and smart girl, which spends most of the film agreeing with Warren and trying to lose the highly obsessed Gus.  Her brains are her strong point, but pay special attention to what she writes down on her notebook after they all arrive at camp.  (Hint: It’s an important clue)

And last but not least, there’s Patrick (Mark Theodossiou), the dorky camp instructor, who’s all smiles until he reads out the note.  Upon hearing a noise, he disappears into the woods to find out what it is….Hey, I didn’t say he was smart.

Joe Bauer wrote and directed this film with a budget of just $20,000.  Most of the clothing seen in the film was the wardrobes of the actors themselves.  The camp that is the main stage of the movie could only be hired for a limited amount of time and it rained nearly the entire time they were filming.  Most of the film was shot in a space of just two weeks.

THE KILLAGE exploits every horror cliché in the book far better than any film I’ve seen before.  It trumps SCARY MOVIE hands down, and considering what a small budget it had, this was an unbelievable achievement in filmmaking.

It was inventive, creative and above all, original which is something that seems to be lacking with modern horror movies.

Now, what kind of review would this be if I didn’t go into some of the more gory details?  The deaths were creative and quoting the killer “Notice how I used every day items available so that nothing could be traced back to me.”

From extremely strong dental floss to a nail sticking out of the floor boards, to a high heeled shoe and a deck of cards, THE KILLAGE had something for everyone.  Some of the deaths we didn’t see; only the aftermath, which was a shame because the head on a pike could have been a very interesting thing to film.  Other deaths were over really quickly while others were painfully drawn out.

But I do want to pause for a moment to talk about one death.  I won’t say who was killed as not to spoil anything for those wanting to watch it.  I’ll just call them V…for victim.  V is outside throwing up.  One body has just been discovered and V’s reacting to that.  After the vomiting stops, V looks up and sees another body.  Startled, V looks up and there’s the killer looking back at them.  The killer begins running towards them and V screams, taking off into the woods.  As V is running, they constantly turn back to see if the killer is behind them and ends up running into a tree.  Dazed and confused, V holds their head, pulling out their compass from orienteering earlier that day and try to pinpoint their location in the middle of the night.  There’s a noise and V turns around.  Suddenly their eyes are wide and V turns their back to the camera.  A high heel shoe is sticking out of their head.

I must say, it was a pretty impressive death.  What made it more real was having V run into a tree.  How many times have I seen a Friday The 13th movie and wondered when someone, who was running through the woods constantly looking behind them, was going to hit a tree, or fall into a ditch.  But it never seemed to happen.

Despite its good points, THE KILLAGE does have some downfalls too.  The over the top acting from some of the characters for starters, although that seems to be deliberate, fitting in with their stereotype characters.  While it tends to mock horror films and their clichés, at some points it tends to go overboard, bordering on tedious.  Like when we see Gus in his room playing his guitar; a shadow walks past his door.  He turns around, calls out “Hello?” before turning back.  The shadow passes the door again.  Gus turns back around, staring at the open doorway.  This goes on for a minute.  Every time he turns away from the door, the shadow passes by.  By the end I was praying for something to kill him just to make it stop.  Funny on paper, tedious on film.

Another thing that bothers me is the stupid one liners the victims say as they are dying.  Terrible lines like “I fold” after having a throat slit by a deck of cards isn’t funny.  It’s over the top and briefly draws me out of the story.  Even Freddy Krueger’s one liners weren’t that bad and he was the king of them in the 80’s.

And last, but not least, the over kill of the killer was also bordering on terrible.  Granted, most horror fans scream out “Hit them again” when we see the hero or heroine finally take control and fight back.  But this was just insane.  The survivors take to the killer with an axe.  They chop the killer’s face in half, stating they were aiming for the neck and missed.  Taking another swing at it, the axe lands in the killer’s mouth.  If that wasn’t enough they dump the killer on the ground before driving over them repeatedly until we see nothing but legs and squished torso.  But our survivors are still not done.  The dump the remaining parts of the killer into the camp fire and watch as the fire engulfs them, spitting on the charcoaled remains.  (Fun Fact: The red oozing out from under the car was actually a watermelon)

Of course, no film is perfect and taking into considering what Joe Bauer and his crew had to work with, the outcome is pretty outstanding.

If you’re looking for something to pass the time, I highly recommend THE KILLAGE.  It’s hilarious and horrifying, not to mention award winning.  (Fun Fact: THE KILLAGE won Best in Festival at the Crystal Palace International Film Festival 2011 as well as Winner of the Spooky Movie trailer competition in Washington DC 2011)

Not the greatest horror film around, but mark my words, THE KILLAGE will become a cult classic.  After all, here in Australia, we know what really scares you.
Posted by Ravyn Nevermore at 4:33 PM