How To Host A Murder: Death By Chocolate

Don't worry, this isn't a step by step guide to teach you how to kill someone with chocolate, but rather an insight into the world of murder mystery games that you can share with you friends.  (I promise, none of my friends were harmed in the making of this article...or on the night.)

On Saturday the 24th of November, I, Rhiannon Elizabeth Irons, hosted an evening of fun, food and murder.    The game was DEATH BY CHOCOLATE. 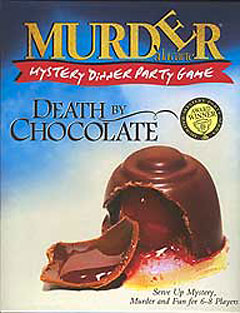 "It's April 15 1900, Easter Sunday, and Paris is the centre of world attention as millions of visitors arrive for the opening this weekend of the International Exposition.  Amongst them is an elite but diverse group of individuals staying at the Hotel Paradiso.  As they gather for dinner, however, the peace of the hotel is rocked by an explosion.  Billy Bonka, the foremost chocolate manufacturer in America, is found dead in his room, having apparently been killed by an exploding Easter Egg."

And that's where the fun begins....

Under normal circumstances, I tend to go all out for parties like this, by creating a three course dinner menu and decorating the house to create the atmosphere depicted by the game.  This time around I tried something a little different.  Food wise, my wonderful partner made a chocolate fondue, combining dark chocolate buttons with milk chocolate ones and fresh cream to create a rich fondue that was then accompanied by fresh fruit (pineapple, cantaloupe, banana and strawberries) as well as marshmallows.  We also had mini sausage rolls, mince pies, bowls of assorted M'n'M's and for desert, there was a specially made DEATH BY CHOCOLATE cake, as seen below. (And yes, those are my boobs in the picture too) 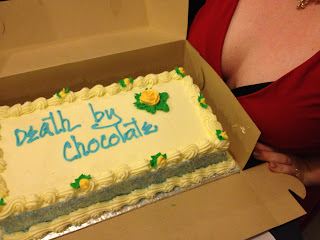 As for decorations, I actually ran out of both money and time so, with my father's help, we strung up simple coloured party lights directly above the table where we were playing and to create the mood of murder, there was a mixed CD featuring artists like The Sounds, The Dandy Warhols, Counting Crows and The Final Curtain's very own Trent Alexander Faulkner.  (The last game I played was set in New Orleans so I used a jazz CD to create the mood while my house was decorated in gold, green, and purple to recreate Mardi Gras)

So that's the set up.  Now onto the characters.

Each person who attended was giving a different character.  To a degree, all the characters have shady facts about themselves, but only one is guilty of murder.  The characters for the game of DEATH BY CHOCOLATE are listed below:

'Chocolate' Bertrand - (played by Shay) The greatest legend of the Belgian chocolate industry, he is known as much for this ruthless business practices as for his suave bonhomie.

Marchioness Duchamp - (played by Amber) An internationally notorious artist, whose work has scandalised two continents, and whose private life has done much the same.

Maria Von Schnapps - (played by Tori) The young business woman who has just taken over as head of a long-established Swiss chocolate firm. (Maria is an extra character.  If you only have a group of six, she can be ignored)

Mike Bison - (played by Neil) The rising star of American boxing, he's in Paris for the Olympic Games, where he's sure that he'll win the gold medal.

Dame Barbara Carthorse - (played by me) The most celebrated beauty in England, as well as a hugely popular romantic novelist.

Dr. Doris Johnson - (played by Christina) An amateur archaeologist specialising in the Aztec culture, she is regarded as being eccentric even in the field populated by eccentrics.

Dr. Sigmund Fraud - (Played by Sam) The controversial psychologist whose theories have won him a small band of devoted disciples and the hatred of conventional society.

Little Fitz - (Not in attendance) The most sensational cabaret star of the day, he shares his ventriloquist act with his dummy Ziggy. (Like Maria Von Schnapps, Little Fitz is an extra character and can be ignored)

(Special Note: Should you have more than eight people in attendance, do not despair for the other people without characters can still join in the fun and be part of the jury that helps solve the case.  You'll be surprised at how much more they pick up without having to play a character of their own.)

Now, you may be scratching your head wondering how these very different people are connected, but believe me, they are.  For you see, each of these characters have something to do with the deceased man, Billy Bonka.  From romantic affairs to business rivals to funding a career, each character listed above have something to do with him... as well as having a motive to kill.

The game itself is simple.  There is a CD with a detective who takes us through the introduction.  Then the characters, as per the script provided, introduce themselves, keeping certain details from ever being disclosed.  Then we move into round 1, which is a simple piece of dialogue before we begin revealing secret clues and accusing each other of murder as well other pieces of information that is stored in each of our booklets.

Once we've finished and everyone has had their turn, the CD detective returns to sum up that round.  Then we repeat the process two more times for rounds 2 and 3.  At the end of round 3 we have our version of events which is our last chance to claim our innocence.  Then before we return to the detective, we go around the table one last time and everyone has a chance to decide who they think the killer is.  Once everyone has spoken their piece, we press play one more time for the detective to reveal who the killer is along with the motive and opportunity. 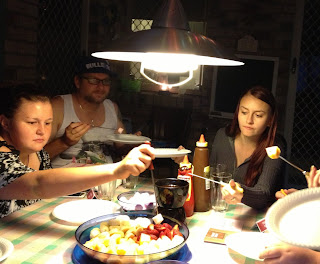 (Above: Sam, Terry and Victoria all eye off the chocolate fondue)


Now, while each dialogue set is probably only 5 minutes long at the most, always set aside between 3 and 5 hours to play the game.  Especially if you're with my group of friends as we're usually conducting a trial midway through, pointing fingers at each other, shouting that "so and so is guilty because of these reasons" as well as eating and so forth.  It really is a life-like CLUE moment.  If you were ever a fan of the board game, the movie or the books, then I highly recommend hosting one of these games because it really is a great deal of fun.

So, how did it end?  I'm not going to say.  I don't want to spoil the chance for you to play the same game and have the same amount of fun that we did.

But I will say this: To each of my guests - Sam, Terry, Victoria, Shay, Amber, my gorgeous cousin, Christina and my loving partner, Neil, thank you so much for attending.  Thank you for being wonderful participants in a little game I call murder.  I look forward to seeing you all again for our next murder mystery evening sometime in April.  I will be in touch.
Posted by Ravyn Nevermore at 11:46 AM No comments:

From time to time, I'll post songs that mean something to me.  Today is no different.  Ladies and gentlemen, please enjoy the lyrics of Angels by Australia's own John Farnham and also check out the video below to hear the song.

Posted by Ravyn Nevermore at 5:33 PM No comments: 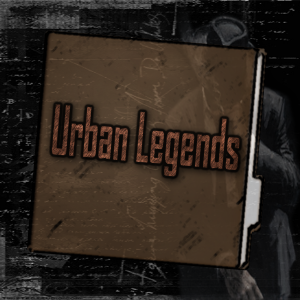 I have some wonderful news regarding my first ever book release.  After years of tweaking my first novel, Ahlephia, I've come to realise there is so much more that needs to be done in regards to the story before I can release it.

However, in saying that, do not despair.  Thanks to the culmination of short stories posted to my blog, I've reached an agreement with my publisher to release a book of short horror stories entitled TALES OF TERROR: URBAN LEGENDS.

Now, chances are you've already read some of them.  Bloody Mary, The Roommate, The Dream are all favourites among the readers of this blog.  But team them with "Someone's In The Backseat", The 13th Floor and my version of When A Stranger Calls and you'll wind up with 19 tales of spine-tingling, lip-trembling terror, all based on urban legends.

I want to thank every single one of my readers for having confidence in me and my work.  Without you, I wouldn't be able to see my dream come alive.  Thank you to everyone who has a left me a comments both on here under my stories or via Twitter.

Within the pages of the book will be seven new short stories plus a bonus introduction and finale that will leave you wanting more.

"You've heard the stories before... But never like this."